NEWS
First in China! Neurophth announced the first patient has been dosed in G.O.L.D. clinical trial for the gene therapy treatment of LHON
Source:   Release Date: 2021-08-24 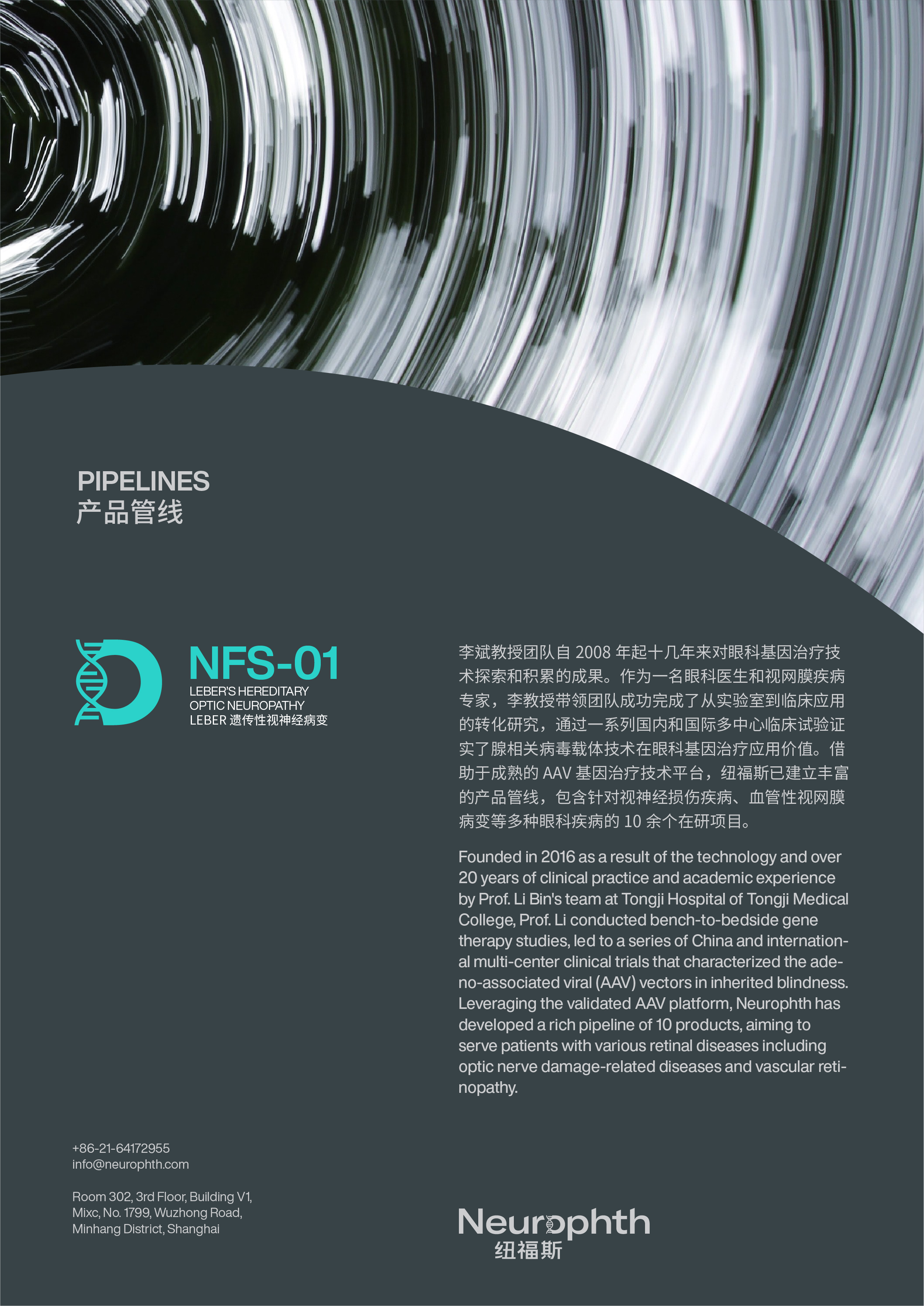 “Every day is an opportunity to make progress in bringing transformative treatments to patients and today’s milestone is an important advancement toward this goal,” said Bin Li, M.D., Ph.D., Founder and Chairman of Neurophth. “Neurophth is committed to advance this program with the greatest urgency on behalf of patients.”

“The goal of the NFS-01 program is to develop a single-dose treatment for LHON associated with ND4 mutation that can restore the vision,” said Xin Zhang, M.D., Chief Medical Officer and Chief Operations Officer at Neurophth. “The first patient dosed in the G.O.L.D. study is an important step in addressing this devastating optic neuropathy disease which there is currently no effective treatment and it’s a great motivation to know that the work we are doing here has the potential to make a life-changing difference to so many blinded people.”

About the Phase I/II/III Trial of NR082

NR082 will be evaluated in a Phase I/II/III, two-parts, multi-center study1 in subjects with Leber hereditary optic neuropathy (LHON) due to ND4 mutation. Eligible subjects (12-75 years old) must have documented evidence of G11778A mutation in the ND4 mitochondrial gene and have experienced vision loss from 6 months to 10 years at time of enrollment. The primary purpose of the clinical study is to access the safety, tolerability and efficacy of NR082. Study endpoints include adverse events, certain laboratory measures (including immunologic parameters) and ophthalmic examinations with the change from baseline in visual acuity at different time points. More information can be found on www.chinadrugtrials.org.cn

Leber hereditary optic neuropathy (LHON) is a maternally inherited blinding bilateral optic atrophy2 with a prevalence of around 1 in 31,000 to 1 in 54,000 particularly in young adult males3. There are three mitochondrial DNA point mutations account for about over 90% of all LHON cases, namely, G3460A in ND1, G11778A in ND4 and T14484C in ND6, with G11778A mutation in NADH-dehydrogenase subunit 4 (ND4) gene causing a ND4 subunit arginine to be incorrectly replaced by a histidine and reducing the activity of NADH dehydrogenase by 50-80% as being the most common mutation worldwide2,4,5. These mutations affect complex I subunits of the mitochondrial respiratory chain, impairing mitochondrial function and increasing the production of reactive oxygen species. The retinal ganglion cells (RGCs) appear to be selectively vulnerable to mitochondrial dysfunction resulting in apoptotic cell death, optic nerve degeneration, and the development of optic atrophy4. Thus, the pathophysiology of LHON is characterized by selective loss of RGCs and their axons, which leads to rapidly progressive bilateral vision loss. The visual prognosis is poor, and most patients progress to vision worse than 20/200 within the first year after disease onset4. There is currently no approved effective treatment for LHON and the current treatment remains limited6.

Investigational NR082, a novel recombinant adeno-associated viral serotype 2 vector (rAAV2) containing a codon-optimized of NADH-dehydrogenase subunit 4 (ND4) gene under the control of the cytomegalovirus promoter and enhancer, is a novel ophthalmic injection that is being developed for the treatment of Leber hereditary optic neuropathy (LHON) associated with ND4 mutations. The Food and Drug Administration (FDA) granted orphan-disease designation in the US to NR082 in September 20207. Safety and efficacy of ND4 gene therapy have been demonstrated in three investigator-initiated trials (IITs) as well as clinical durability up to 90 months at the first IIT. The results of these three IITs of 186 LHON patients demonstrated that an intravitreal injection of rAAV2-ND4 in subjects with LHON is well tolerated and can be effective at improving visual acuity8,9,10.

Neurophth is China’s first gene therapy company for ophthalmic diseases.  Headquartered in Wuhan with subsidiaries in China (Shanghai and Suzhou) and US (California), Neurophth, a fully integrated company, is striving to discover and develop gene therapies for patients suffering from blindness and other eye diseases globally. Our validated AAV platform which has been published in Nature - Scientific Reports, Ophthalmology, and EBioMedicine, has successfully delivered proof-of-concept data with investigational gene therapies in the retina. Our most advanced investigational candidate, NR082 (NFS-01 project, rAAV2-ND4), in development for the treatment of ND4-mediated Leber hereditary optic neuropathy (LHON), has granted orphan designations by the U.S. FDA and its IND has also been approved by the China NMPA in March, 2021. The pipeline also includes ND1-mediated LHON, autosomal dominant optic atrophy, optic neuroprotection (e.g., glaucoma), vascular retinopathy (e.g., diabetic macular edema), and five other preclinical candidates.  Neurophth has initiated the scaling up in-house manufacturing process in single-use technologies to support future commercial demand at the Suzhou facilities. To learn more about us and our growing pipeline, visit www.neurophth.com.