LHON is a maternally inherited mitochondrial disease that mostly affects young men between the ages of 14 and 21 with binocular vision impairment and blindness. First discovered by German ophthalmologist Theodor Leber in 1871, the disease affects about 600,000 people worldwide, including 100,000 in China. LHON is a disease caused by mitochondrial DNA mutations. The three primary mutations are located at the 11778th, 14484th and 3460th locus in the mitochondrial genome. More than 90% of LHON patients are associated with one of three mutations - G11778A (ND4 gene), G3460A (ND1 gene) and T14484C (ND6 gene), notably the G11778A accounts for 50% ~ 80%. The mutations will cause the damage of mitochondrial biological respiratory chain and ATP deficiency. Consequently, the optic ganglion cells of the patients produced oxidative stress , leading to cell apoptosis. At present, there is no effective therapy or cure for Leber’s hereditary optic neuropathy.


The founder of Neurophth, Prof. Bin Li’s team began the study of gene therapy in ophthalmology since 2008 , launched the world's first LHON gene therapy investigator-initiated trial (IIT1) in 2011, and initiated the world largest sample size international multicenter gene therapy clinical trials (IIT2) in 2018. Though these two studies, they have been accumulating the longest follow-up time and the largest sample size of safety and efficacy data, providing supportive evidences for the industrialization development of LHON drug candidates.


LHON has been listed in the first Chinese National List of Rare Diseases in May 2018, and the development of LHON candidate drugs is expected to benefit from a series of incentive policies for the R&D of rare diseases. In addition, NFS-01 (NR082, rAAV-ND4) was designated as orphan drug by the U.S. FDA in September 2020, which laid a foundation for accelerating international development of this product. 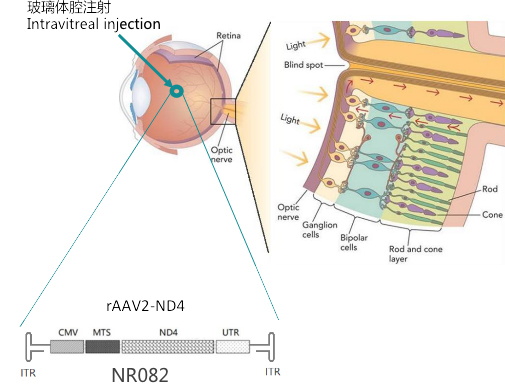 Leveraging gene therapy strategy, we use recombinant adeno-associated virus as the vector to deliver the correct genes to the patients' damaged optic ganglion cells through introvitinreous injection, thus repair the mitochondrial biological respiratory chain, and restore the vitality and visual function of optic ganglion cells.


Among the 9 LHON patients with G11778A (ND4) mutation enrolled in the trial, visual acuity in 5 patients improved significantly, with the best visual acuity returned to 0.8. The average best-corrected visual acuity improved by 0.39logMAR (i.e., nearly four lines of letters read) in 9 patients. Eight of the patients completed nearly 8 years of long-term follow-up, with no serious adverse events, and the visual improvement in five patients has been maintained to this day. The clinical trial data, which is the longest follow-up record in the ophthmologic gene therapy field, was published in Scientific Reports 2016, in EBioMedicine 2016, and Ophthalmology 2020 , and was reported at the Annual meeting of the American Society for Gene and Cell Therapy (ASGCT) in 2020.

Encouraged by the initial success, Prof. Li's team has completed an international gene therapy clinical study during 2017-2018 in 159 LHON patients in China and Argentina, which is the world's largest clinical trial for gene therapy. Similarly, the 12-month follow-up results showed that NFS-01 has remarkable curative effect and no obvious serious adverse events have been found. Among 143 subjects who completed one-year follow-up, 81 (56.6%) had significantly improved visual acuity in the injected eye, with an average visual acuity of 0.57 LogMAR (5-6 lines of letters read). The result of these two studies were presented at ARVO and ASGCT 2020.